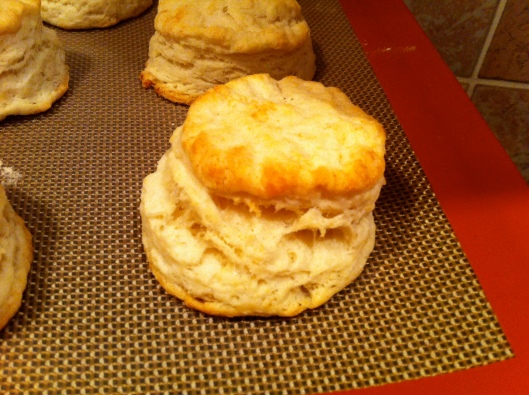 One of my good friends and a loyal meliovore reader has complained to me lately about how the frequency of my posts has noticeably slowed down, and I know it’s true. She and I live about five hundred miles away and we don’t always get to see each other more than once a year or so, and the blog has been a way of keeping in touch. (I’d love it if she’d guest post and offer up her recipe for Northern Italian chicken stew with polenta, btw.)

I wish I were keeping up my former once-a-week pace too but in August I began working again in a more traditional office job and the blogging has been the first casualty. I find myself often having to choose actual cooking over writing about cooking. Then I remembered my friend the biscuit. The biscuit is a quick bread after all, and it would serve to offer me a quick subject for my next post as well. Maybe nowadays it’s not considered truly quick unless it’s being popped out of a Pillsbury tube or mixed together from Bisquick, but in the meliovore tradition I stopped dealing with those products several years ago.

It wasn’t the easiest transition, moving away from banging the cardboard tube against the counter and popping out prefab biscuits toward fluency in the from-scratch kind. My first several attempts were deemed by my daughter not as good as the Pillsbury ones and that was certainly discouraging. My mom was raised in the South and I know a cook’s reputation there and elsewhere rides pretty heavily on the lightness and flakiness of his or her biscuit. As such, I felt mastering the skill was a point of pride, and I perservered. Fortunately, a good friend to whom I had confided my plight said she had a recipe she liked and served us great biscuits that went with a signature casserole dish of hers and she was willing to share her recipe with me and the rest of y’all. I have been turning out good biscuits via her recipe ever since (except for that one time when I forgot to put in the tablespoon of sugar). The last time I made them a few weeks ago, I was midway through the recipe when I realized I’d never unpacked the rolling pin, but I spread the dough out with my hands like homemade pizza in a pizza pan before cutting them into biscuits with a wineglass (the biscuit cutters were packed up too). They turned out just fine, they’re the ones pictured here.

Biscuits, even from scratch, are quick by nature and fun to do. Wouldn’t it be nice to have these on the table for Thanksgiving? Give ‘em a shot. You won’t regret it!

Combine flour, baking powder, salt, cream of tartar and sugar
Cut in butter
Stir in milk
Knead 30x (I do much less than this though!)
Roll to 3/4″, cut rounds (sharper edge gives a better rise on biscuit)
Bake on an ungreased cookie sheet
450°F for 10 minutes

A tip from the editor: If your biscuits don’t have to be perfectly round, you can cut them into hexagons. That way you don’t have to keep rolling out the dough, the biscuits will fit together before you separate them for baking. I’ve never done that, but it looked pretty cool when I saw it on TV.