Thirty years ago this past July, I moved from New York to California. Other than a few sojourns – a few months living in other places, Eugene, Missoula and Miami – I’ve been a sturdy California transplant. It wasn’t until this fall, however, that I went through an important rite of passage that makes me feel like I’ve arrived as a true Californian – I made my first from-scratch batch of granola.

My first introduction to Californians was the summer between Junior and Senior year of High School, when I went to the Boston University Tanglewood Institute (BUTI) in Lenox, Massachusetts. There were several pretty cool representatives of the San Francisco Bay Area in the orchestra and choral programs but before meeting them I had little-to-no real life exposure to Californians in my suburban New York hometown. I remember one of our fellow choir-mates exulting when she received a care package from her mother. “My mom’s granola!” she cooed as she waved the box in triumph. “Mom sent me a batch of her homemade granola. It’s the best.”

“Mom’s homemade granola? Seriously?” I thought, as I inwardly rolled my eyes. I declined to taste it.

Back when I was a teenager, when people from New York called someone earthy-crunchy, or a granola, it was not meant as a compliment. A mere two summers later I’d be making my first visit to California – hosted in the north by one of my Tanglewood friends and in the south by a college classmate – and fell in love with the place. Hikes and gym memberships, teva shoes – all these were to be my destiny. I moved to Los Angeles at age 23 with two suitcases, got an apartment in Venice Beach, rooming with a California native who transferred her knowledge of the best of earthy-crunchiness and the ways of taming the Brussels sprout, and I never looked back.

You may remember I mentioned being crushed when the gluten free Chex Mix granola was discontinued. It was so tasty. So highly rated by its fans. I wasn’t the only one who tried to stockpile bags through Amazon when it became clear that it was going away. Another good brand down. Though I never found a decent substitute, I never thought of making my own until we were on a family trip in Palm Springs this past fall with my husband’s siblings and one of his sisters brought a bag of homemade granola. The GF granola that I’d bought at the local safeway was, like many I’d tried, stale tasting from the get-go. But the homemade granola – with a bunch of interesting adds like pepitas and some mystery seeds – tasted so fresh. That’s what got me, the texture of give and crunchiness at the same time.

Once back home, I bought a bag of rolled oats and browsed the internet for a simple recipe to try. The recipe was so easy and it made the house smell so great while cooking. It was then I remembered Coco, the girl from California who was starry eyed over her mom’s granola care package, and I understood the connection of how a granola would send a comforting reminder of home with the toasted oats.

It occurs to me that in all the years I’ve been writing meliovore I’ve never particularly mentioned America’s Test Kitchen or their Cook’s Ilustrated Best Recipe series of cookbooks, but we have been fans for a long time. While I don’t always agree with the results of their trial and error experiments for determining the ‘best’ way to cook classic dishes, they are a wonderful resource for cooks. Knowing they are out there, spreading the word to the public about whether to egg wash or not to egg wash, helps me feel more empowered (or less embarrassed) to liberate my inner food-nerd self. Now that I seemed to be entrenched in making my own granola every few weeks, I thought I might as well try some trial and error variations myself to come up with my granola gold standard. 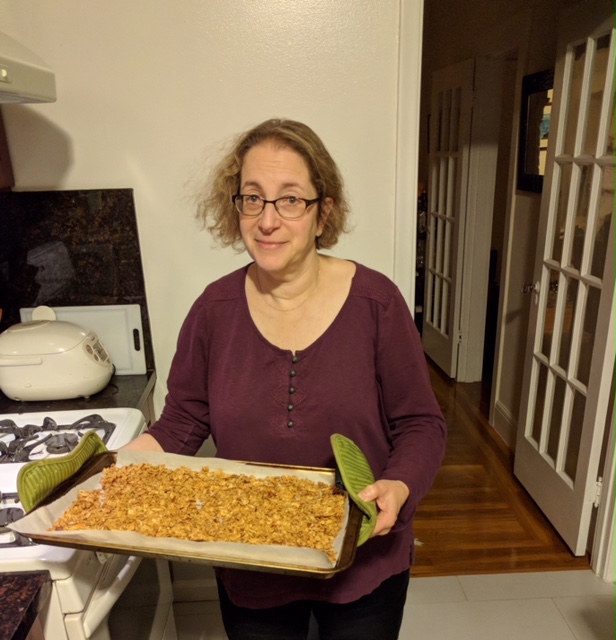 Note:  Now I am an Earth Mother who makes her own granola, my smile is more enigmatic and Mona Lisa-ish.

My first couple of batches came from a very basic recipe I found on the internet using melted butter and honey in even proportions (3 tbsps each to 2 cups rolled oats), a teaspoon of vanilla, a teaspoon of cinnamon (which I cut drastically), slivered almonds and a pinch of sea salt. I liked this a lot, particularly because it wasn’t very sweet. Though it topped my morning cup of greek yogurt, which had sweetness of its own, I felt I wanted the granola to be a bit sweeter.

I polled some of my co-workers – whom I suspected would say ‘of course’ to being asked if they made their own granola – to find out whether they used oil or butter. One said she used grapeseed oil and honey and the other used coconut oil and maple syrup. I tried the coconut oil first, buying a beautiful jar of Dr. Bronner’s brand (of the castile and almond soap people). I also added a few more ingredients based on another, more complex recipe sent to me by a friend that involved a lot more items that I mostly ignored (like pepitas, coriander, dried fruit and coconut flakes) but I decided to try the cooking time of 30 minutes at 325°F as opposed to 20 minutes at 350°F that my butter-based recipe called for. For this batch (#3) I used two tbsps coconut oil, one tbsp. butter, two cups rolled oats, ¾ cup sliced almonds, a ¼ tsp cinammon, ½ tsp vanilla, and 2 tbsp brown sugar.

You take the wet ingredients and either microwave them or warm them enough over the stove so that they get syrupy, combine with the spices and pour over the oats and mix through – this is a hands on job – until all the oats seem moistened. This is spread over foil or parchment paper on a cookie sheet. Whether you are cooking at 350°F or 325°F, you need to peek at it and stir it around once or twice, (tongs or a spatula work best) making sure that it doesn’t get too browned. When you take it out of the oven, let it sit on a rack until it’s completely cool. Then it can go into the airtight jar or canister where it can stay, maintaining its freshness, for about two weeks.

With the batch with the two tablespoons of coconut oil I felt that the coconut flavor was too strong. Not too strong to enjoy it for two weeks as I ate through it along with my yogurt most mornings, but it was too strong to be my signature blend. So far, I’ve been going through all this granola myself, but I was also aware that the in-your-face coconut note would keep husband and child away from it.

As long as I was continuing to experiment, I thought I would like to try to develop a good dairy-free version for a friend who’s had to cut gluten and dairy out of her diet. So for my fourth batch, I used 2 tbsps of grapeseed oil with 1 tbsp coconut oil, still the 3 tbsp. honey, and everything else the same except a little bit more brown sugar.

It’s been interesting how each batch that has used the additional brown sugar and has not included any butter sits up higher in my mason jar than the butter only batches have. It seems like the oils provide a sturdier structure to handle the addition of perhaps rice chex or more ingredients of varying shapes. This particular batch I felt that it had a sharper mouthfeel. Everything was a little more brittle. Truthfully, though, these differences have been pretty minor and I don’t notice them as much after I take off the kitchen-scientist toque after trying the new batches for the first time. I’d enjoy any of them again, but I think for my next batch I’m going to go back to some butter and coconut oil. Also, there’s another variation that the Cook’s Illustrated people could explain better than I could, and in convincing scientific jargon probably, about the role of parchment paper versus foil. I liked the butter versions for being more toasted, but that might have been the foil aiding the toasting of the oats more than the butter. So for my next dairy-free batch I’ll try foil and see what happens then. The possibilities are fairly endless, and clearly I am at the beginning of my granola-making-momma career.

Last night I made batch #5. I kept the non-dairy ingredients of 1 tbsp. coconut oil to 2 tbsps. grapeseed oil but used the baking method from the butter batches – using foil instead of parchment on the cookie sheet and stirring twice during a 20-25 minute back at 350. I also added a cup of rice chex, to remind me of my old commercial brand favorite. The experiment was a success! The toasting was more thorough and the sharp edges I’d felt from the parchment batch was gone. 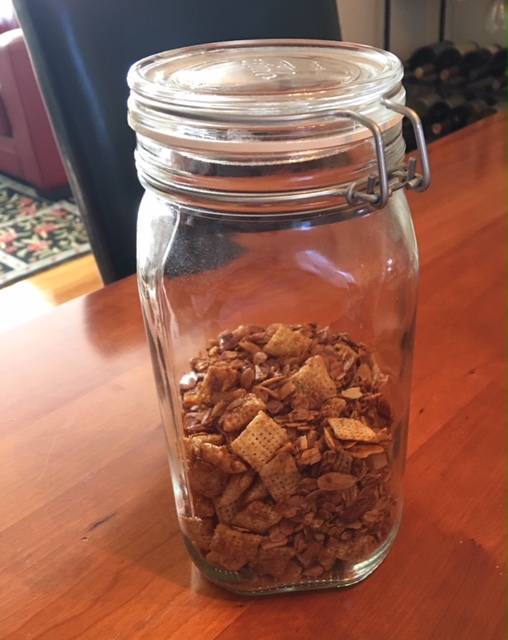 Also, I’d be remiss in going on and on about making your own granola without pointing out that buying a 2 lb bag of Bob’s Red Mill rolled oats for $5.00 and churning out 5 batches of granola with it as a base ingredient is a lot cheaper than buying those $7.00 bags and cursing their staleness after they’ve been open a day or two. Good honey isn’t cheap, but it’s nice to control the quality of the honey in the mix, and actually use up what’s in the cupboard for a noble purpose.

If I felt like a true Californian after making that first batch of granola, I feel even more so now that ‘make a batch of granola’ turns up every couple of weeks as a mental note for my to-do list.

You will need a medium sized mixing bowl, a whisk, tongs, and a jelly roll pan (a cookie sheet with sides) lined with aluminum foil.

Preheat the oven to 350 degrees F.

Measure the butter, the coconut oil and 2 of the 3 tablespoons of honey into the mixing bowl – I use glass so that I can put it directly in the microwave, but if you are using metal mixing bowl, melt these in a microwave safe smaller bowl or pyrex measuring cup.

Add the third tablespoon of honey to the melted mixture, then the vanilla, cinnamon and brown sugar. Whisk until combined and a rich dark brown.

Add the two cups of oats and toss with a pair of tongs. Add the nuts and toss until all the dry ingredients are thoroughly coated. Spread on the pan lined with foil (shinier side up).

Place in the oven and set timer for 24 minutes. Plan to take out the oven and stir around the toasting oats two times during the cooking. Roughly at the 16 and 8 minutes marks. Pay attention to your oven’s heat and the granola’s progress. If at the 16 minute mark, granola at the edges is getting very dark turn down your oven immediately to 325 or 300. At the 8 minute mark I usually turn my oven down to 325.

Take the granola out of the oven and after one more stir with the tongs, place the tray on a cooling rack. The granola will still be wet but will harden as it dries. When it’s cooled down – wait at least 30 minutes – rake it with the tongs one more time and put it in a sealed container. Give it a shake for luck. Enjoy as a yogurt topping or a baking ingredient. I suspect you will want to think of excuses to use it pretty often. Candied oats are super tasty!

2 thoughts on “Granola: or On Achieving Earthy-Crunchiness”