Click on the individual link to get more useful information about each item, including recipes and good farm fresh sources. Here is the entry for our friend the Asparagus:

The most anticipated harbinger of warm weather is the season’s first asparagus. When soil temperatures reach 50 degrees, the slender shoots emerge from the ground, leaving no doubt that spring has arrived.

The word asparagus stems from the Persian word asparag, or sprout. The plant has been cultivated for more than 2,000 years, and the people of Ancient Greece and the Roman Empire used asparagus medicinally, for preventing bee stings and soothing toothaches. The vegetable thrived all over the Eastern Mediterranean for hundreds of years, finally making its way to France during the reign of Louis the XIV, who loved the tender stalks so much that he had greenhouses built just so he could eat asparagus out of season. Asparagus arrived in the US along with the European immigrants of the 19th century. Today, California leads the nation in asparagus production; the marshy conditions of the Sacramento Delta are perfectly suited to the labor-intensive crop.

Prized for their tender, edible stalks, asparagus spears are actually the shoots of a perennial plant that is a member of the lily family. Growing asparagus is a long and arduous process, which explains why it can sometimes be expensive. Even on large commercial farms, workers hand-harvest each spear, and it takes two or more years for the first asparagus to appear after its seeds are sown.

Asparagus comes in hues of green, purple and white. Though green is the most common color in American markets, 55 percent of asparagus around the world is white. Harvested from the same plants as green asparagus, white asparagus has simply been deprived of sunlight. The lack of light prevents the production of chlorophyll, blanching the stalks. Asparagus can be sheltered from the sun by either mounding soil over the emerging shoots or suspending thick black plastic over the crop’s rows. Though white asparagus is tougher than its green counterpart, it also has a more delicate flavor.

The Fine Print: “The Center for Urban Education about Sustainable Agriculture (CUESA) is a nonprofit organization dedicated to cultivating a sustainable food system through the operation of the Ferry Plaza Farmers Market and its educational programs.”

CUESA is all about bringing better food and eating systems directly to us, the people. I have a couple of good cookbooks that profile each vegetable (The Victory Garden Cookbook and Simply in Season) but this online resource is so handy I just thought I’d showcase our local SF hero. Thank you CUESA! 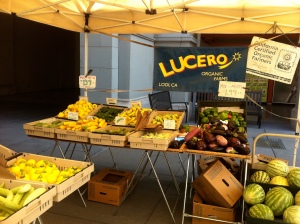 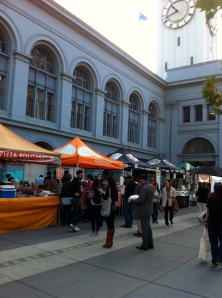 Wednesday Farmer’s Market at the Ferry Building in SF