It’s that time of the year when the various news groups and critics circles are wrapping up 2011 with year in review stories. The Los Angeles Film Critics chose Alexander Payne’s The Descendants as best film of the year, the New York critics chose the silent/B&W film The Artist. I’m more interested in seeing the latter because it sounds so unusual, but as has been the trend, I see fewer and fewer of the films nominated for Academy Awards each year. My netflix queue these days has mostly been catch-up from last year’s movies.

I thought I’d take a stab at my own little critic’s choice review for what went into and came out of my kitchen in 2011.

Best New (to me) ingredient or product: Last year my new best friend was the tough exteriored but delicately nuanced celery root. Restaurants and deli-counters may use the celery root more creatively than I do – I mainly put it in chicken stock or other soup bases – but judging from some slaws and purees I’ve had, our relationship still has much room for development. But that was last year. I tried out kohlrabi this fall, and it is fun and different, but it hasn’t exactly rocked my world. For 2011, I’d have to give the nod to crème fraiche. Trader Joe’s and Whole Foods and one of my local produce markets carries the Bellwether Farms variety, and it is an amazing last minute additive, deus ex machina, really, to a pasta sauce or mashed potatoes. It’s a nice substitute for places you’d use sour cream too. I have never been the biggest sour cream fan and the taste of crème fraiche is richer and smoother.

Best New Holiday Tradition: While I did like the Thanksgiving innovation that occurred this year, that of rolling out additional sides and pie for the day-after Thanksgiving dinner, I have to give the best new holiday tradition prize to baking a fresh loaf of bread to end the no-bread-for-a-week endurance test of the Passover holiday. My family and I ate our slices of fresh bread that evening in quiet, concentrated rapture. I will definitely be doing that again this year. I used the basic sandwich bread recipe from the Cook’s Illustrated’s Best Recipe Cookbook. 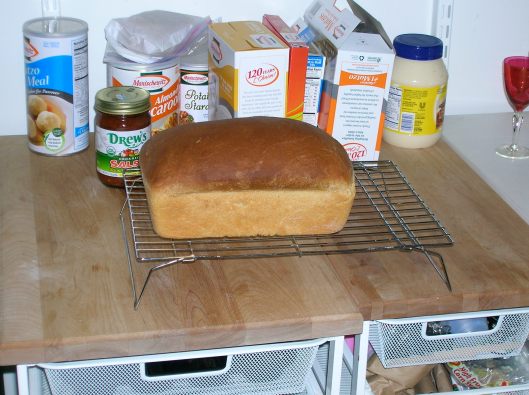 Bread loaf facing down the line of Passover products.

Best New Dish/Recipe: It continues to be a failing of mine that I will buy a cookbook and then not really make anything but one recipe out of it. I will try not to do that this year as I haven’t yet made even one recipe out of the Mexican Cuisine cookbook I bought this summer. (But I did open the cotija cheese that’s been lying in wait in my fridge for months to goad me into making something. I sprinkled it on a carnitas taco. Eh. Kind of a lesser feta in my view.) I officially resolve to delve more deeply into the cookbooks I have before I buy any new ones. And of course the internet is a pretty reliable source for basic recipes. My best newcomer, instant classic entry in our household for this year came from an internet search for a pie recipe that we only knew of by name and my husband’s memory: The Prince of Wales Pie.

This pie is not terribly well known. I am assuming it is more popular in the UK or New England. The restaurant where my husband used to order it was a British Pub in Duluth, Minnesota. I have now made the pie several times and given it as a food gift. The feeback from some foodies I shared it with has been wildly positive and full of a wonder that they were trying something new under the sun. Prince of Wales Pie is essentially a candy pie. You make a simple penuche (think praline or blonde) fudge and swirl in some chocolate chips after you’ve poured in a pre-baked crust. It sets in the fridge to cool, just as a fudge would. Some preferred to eat it very cold with whipped cream, to cut the richness. My daughter, not a whipped cream fan, likes it as is, but warmed up for just six seconds in the microwave. Classically it should have raisins too, but I cut them out.

Here is the recipe, which I found online from TasteBook.com. It is very easy with big rewards, big calories too but, oh well…at least they are honest, unadulterated and uncornbobulated calories. 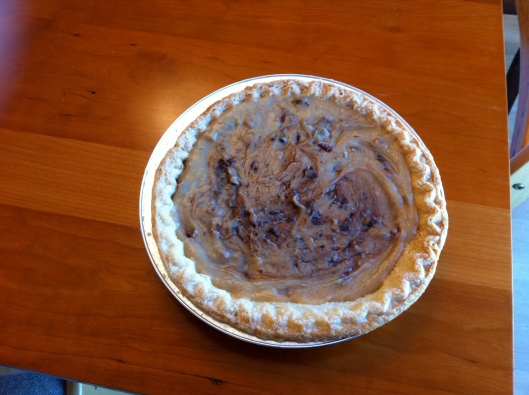 Toast the chopped pecans in a toaster oven (275 degrees for 12 minutes or to taste.) Mix sugar, butter and condensed milk in saucepan and heat on medium, stirring frequently. Boil 7 minutes. After it thickens take off heat. Add pecans. Pour into crust.

Sprinkle chips over pie. Use knife to swirl the chocolate into the caramel filling.

Chill until hard. Serve with whipped cream. Good warmed up a bit too.

I recommend you start with small slices, about 1/10th of a pie per person, and the most enthusiastic will chip away at it for seconds from there.

So that’s my simple group of firsts and bests, and like those Academy judges, I’ll admit to having a shortish memory and favoring kitchen activities that occurred later in the year. But it was in the middle of this year that I started the blog, and so meliovore will be keeping a record of the good, the bad, and the experimental for a more complete review next year. Thanks for reading along and I wish you all a wonderful New Year, filled with health, tastiness, variety and plenty!