A few years ago I wrote a post called Bored with Breakfast. This is my gluten free update. I could have written a whole post about grocery products I have loved and leaned upon heavily that have then gone away, starting with my most recent heartache – Chex Mix Gluten Free Honey Nut Granola, which up to now has been my gluten free MVP. 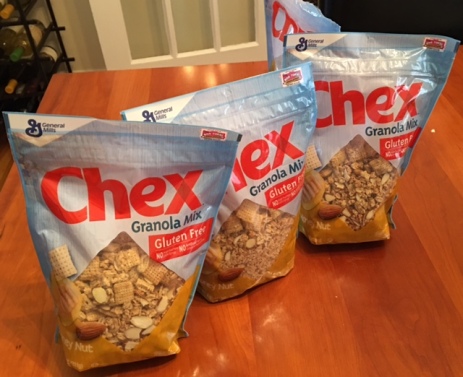 Because of this stuff, you have not heard me whining at all about breakfast options in the past year, even when they have been severely curtailed by my omitting wheat from my diet. I have been eating Greek yogurt mixed with the GF granola probably 6 out of 7 mornings.  When the grocery stores stopped carrying it, I ordered multiple bags from whatever online concession still had it in stock, going through Amazon, soap.com and finally jet.com until the well ran dry. I’m down to my last three bags and no one seems to be carrying it any more. Despite the incredibly positive comments about this product from its devoted fans that used to be on the Chex website, it seems Chex has stopped making it. The glowing comments and any references to the product line have been scrubbed from their site. Oh well. It was nice while it lasted.

Yes, it has been suggested that I can make my own granola. Even though I live in Northern California, I can tell you right now that is not happening. I will certainly face reality and switch (reluctantly) to another brand.  The runner up to the Chex GF granola costs more and I liked it less, and half the time it was stale when I opened a new bag.

So I need to diversify. Big time. I’m branching out and slowing down my granola consumption pace because I want my prized cereal hoard to see me through to the batch’s April expiration date.

On those mornings when I want a break from the yogurt/granola combo, I often have this: 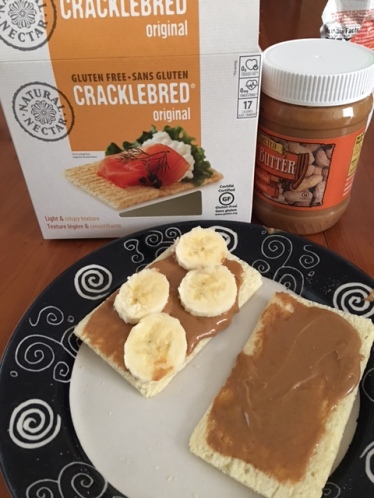 Or some variation of eggs on leftover rice, a Japanese quickie donburi sort of thing: 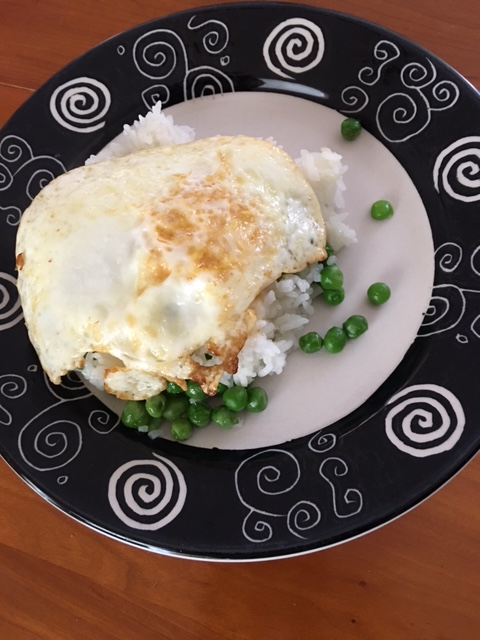 And I almost always have a piece of fruit either with my main breakfast or as a mid-morning snack.

It would help if I liked gluten free bread or oatmeal. I just don’t, so they are not part of the rotation. Grits I do like, especially with bacon or turkey bacon (below) crumbled in. That is definitely a weekend breakfast treat. I can have corn tortillas, or cereals like Cheerios or rice or corn chex but I don’t usually turn to them. I realize I’m relying a lot on dairy here, but in the future when some doctor tells me that I can’t eat yogurt and cheese any more, I will probably do more with rice and savory veggies. And maybe I’d revisit oatmeal. No promises. 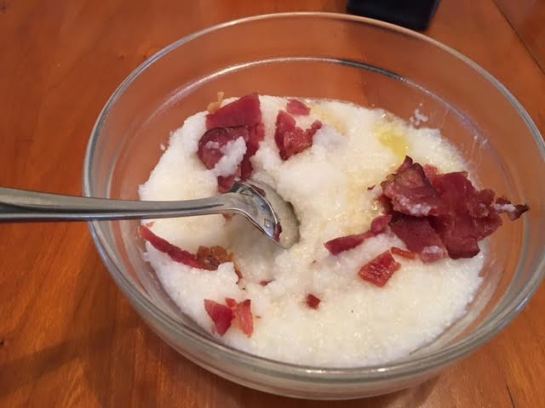 So it strikes me as a little ironic that back when I was more bored with breakfast, 5 years ago, the whole world was my breadbasket. I could have croissants, muffins, bagels, etc. – though I was trying to avoid them so that I was not having bready bakery goods all the time. My instinct then was correct, and my health is better since giving them up. My digestive track is generally less persnickety and I have less of an appetite at breakfast time. And that, I believe, leads me to being less bored with my more limited options. Marian Nestle also defends that it’s okay to skip breakfast. I must admit I was a little shocked to read the article about that, but she says many of the studies that threatened people never to skip breakfast were sponsored by the cereal companies.

What are some off-the-beaten-path breakfasts that you guys have turned to in your quests to cut down on your intake of sugar and carbs? I would love to hear.