My phone tells me that the mid-afternoon high today will be 61ºF.  My phone is sometimes wrong, but it’s not usually far off. Week before last, when I was visiting in New York, I took the train into the city and walked what might have been a mile from Grand Central Station to a restaurant at 51st and 8th Ave. where I was meeting lovely friends, stopping along the way here and there. So I was not rushing or walking at a crisp, Manhattan clip. The heat could have been worse, it was a muggy 88 degrees, but I am not used to it and was sweating like a sumbitch by the time I got to the restaurant. During lunch I was self-consciously, if surreptitiously, mopping the back of my neck with a paper napkin until my hair dried somewhat, an hour and a half later. This is what you expect of a July day in most of the country, and I do like to visit the summer weather I grew up with. But still.

Since I’ve been back in San Francisco, the weather has been typically what we know as summer-cool. White skies and breezy – at least in my foggy neighborhood of the Richmond. The thick marine layer won’t clear to reveal the sun until possibly 6:00 pm, and the temperature around lunch time in  my work neighborhood will not go above 65. Therefore, I commute with a raincoat and a second shirt or cardigan layer under that.

All this to say, as I offer up this recipe for Chicken Paprikash, is that it is not weird at all to cook and serve this hearty Eastern European comfort food dish to my family on a July evening, as I did last week. 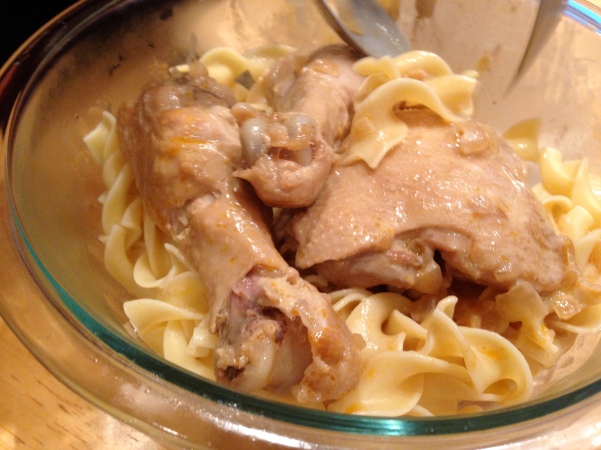 You may recognize the recipe’s documentation style from Joy of Cooking. This recipe is annotated with notes and a few helpful hints.

Melt in a heay pot:

Add and simmer until glossy and red:

As soon as these ingredients have reached boiling point, add the chicken.

[This is the part Ms. Irma does not tell you, temper the sour cream or yogurt by putting a few spoonfuls of the hot stock into the sour cream and stirring before you add it to the full batch. This will prevent the sauce from breaking. Pictured below.]

Stir it slowly into the pot and simmer until thickened and smooth, about five minutes, but do not boil.

Serve at once. Good with egg noodles or rice. Serves 4.

The last time I made it, I had leftover sauce and I didn’t want it to go to waste. Because of the dairy, it doesn’t freeze. So the next day I made cauliflower simmered in the paprikash and it was very tasty. 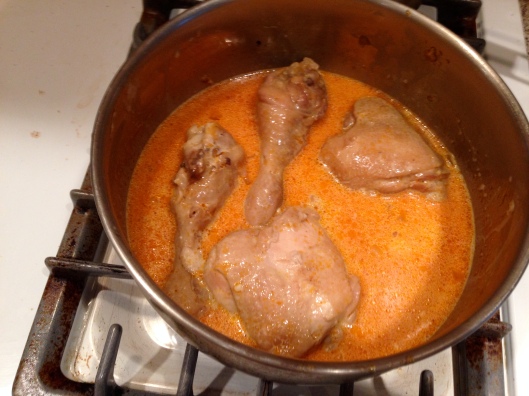