I know what you’re thinking: “Big Whoop, welcome to the 21st century.” I know, it’s not exactly a cutting-edge breakthrough; but for us it is a very good step forward, and was driven by our daughter who finally embraced the change after taking some 21 day challenge that disallowed sweets, white bread, etc. My husband said he’d be okay with the change a while ago, as long as he wouldn’t have to put up with a lot of seeds or chewy wheat bits or other tomfoolery in his bread. So that criteria seemed to rule out a lot of grainy breads that are in favor at the stores these days, but I think I’ve found a good, honest loaf in a national brand’s unadorned whole wheat that will work for all of us.

Another excellent development is that our daughter, soon to be 13, has moved on from having Pasta a la American kid, with butter and parmesan cheese, and now enjoys Pasta alla Carbonara and Alfredo at restaurants and at home. I’m not going to pretend to know what you’re thinking this time, but it’s probably confusion followed by scorn. “Cream sauces are a tool of the devil, aren’t they? Why are you touting those?” Well, I’ve been following the stories in the newspaper about the latest findings of the DGAC (Dietary Guidelines Advisory Committee of the US Dept of Agriculture)’s Report, with the-well cited JAMA article summarizing these findings. The JAMA article (the Journal of the American Medical Association) published June 23, 2015, bears the exciting title “The 2015 US Dietary Guidelines: Lifting the Ban on Total Dietary Fat.”

If we can truly stop fearing fat quite as much and stop lionizing non-fat salad dressings, I say hooray. I never stopped believing in butter over margarine. I was right not to shrink from guacamole and chips as a power lunch! The DGAC now suggests that there be a floor and no ceiling on the daily recommended intake of fat – assuming that we should lean toward good fats and  not saturated fats and recognize the difference. What do I mean, a floor and no ceiling? It means you shouldn’t try to eliminate fat from your diet, you ought to get a minimum 20% of your calories from fat. Trying to completely eliminate fats from your diet is not healthy and our brains – especially our middle aged ones – don’t function as well without it. I recommend checking out The New York Times op-ed piece published last week that summarizes some of these issues so well, in case you missed it.

The NYT article defends the point that we NEED fat and were hoodwinked by prior assessments of this august DGAC into eating more carbs in our effort to reduce fat since this whole rigamorole linking fat and cholesterol with instant heart failure and doom began in the 1980’s. Michael Pollan writes about this extensively in his wonderful treatise, In Defense of Food.

So I’m going to go out on a bit of a limb here, defying our ingrained attitudes, to defend the cream sauce. I defend the roux too – now that I know how to make one. Cream sauces for pasta are satisfying and filling. (I am marginally lactose intolerant so I really don’t go for this stuff often, but I am happy I don’t have to go without entirely.) I usually don’t want dessert after we’ve had a dairy heavy entree. I also want to share this cream sauce based recipe with you all because it’s a good weeknight dinner and is an economical dish to make. If you know how easy it is to prepare, maybe you won’t feel like spending the big bucks for it at an Italian restaurant. Plus, if the pasta is something you’re not supposed to eat so much of, then you’ll eat less of the pasta coated in alfredo than the pasta in marinara. How’s that for a rationalization?

This dish is easy to make mainly because I buy Capellino brand prepared Alfredo Sauce. 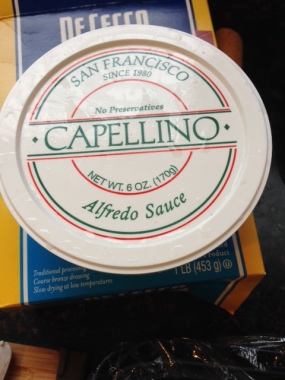 It is a local San Francisco product, but I am guessing that most regions of the country have an equivalent. I became a fan when I found it when we had to cut back so drastically on salt. It is a very low salt sauce compared to major brands. This six ounce tub, using this recipe, will yield 3-4 servings. I usually make enough so that I can bring some to work for lunch the next day but that’s our fourth serving. 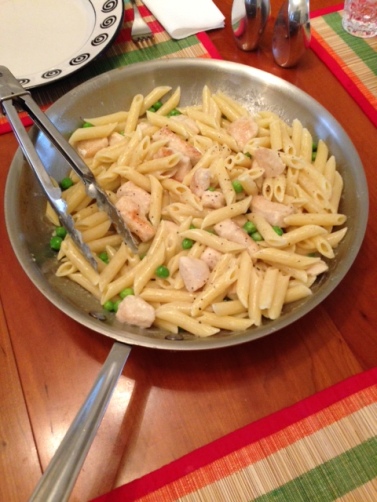 4 thoughts on “In Defense of Cream Sauce”