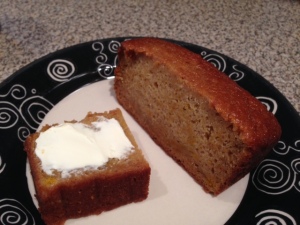 Yes. Another pumpkin post. Pumpkins rule between Halloween and Thanksgiving and my last post was more about the pumpkin’s playful side. They are a generous and versatile food (and craft medium). A cook could choose to make pumpkin-based soup, a side vegetable, cookies, pie or cheesecake – all from the same modest-sized pumpkin! (And don’t forget the snacky seeds you can mine from deep inside!) If nature has a better bargain anywhere, I would like to know it.

I prepped a pumpkin last weekend so that I could make pumpkin bread, freeze some for soup and give my sister a bag of pumpkin because she is assigned to do the pie. Here’s how Marian Morash in The Victory Garden Cookbook advises preparing a pumpkin for cooking:

If you want to use only the flesh, cut off the top and also cut across the bottom so that the pumpkin stands flat on the counter. Then, as if you were cutting off an orange skin, cut down under the skin from top to bottom, and work your way around the pumpkin. This goes much faster than cutting the pumpkin into chunks and then peeling them. Then, halve the pumpkin and scrape out the seeds and pulp.

And that’s what I did. I steamed the chunks in a few batches because my steamer isn’t that big (though Morash offers the tip of using a colander inside a larger pot) and then bagged and distributed them.

I had been planning to send a copy of The Victory Garden Cookbook to a vegetable loving kinswoman of mine and was chagrined to learn that it is currently out of print. It seems unfathomable to me that this should be so. The Victory Garden Cookbook, based on a PBS show I never saw, is organized by chapters on each vegetable, including gardening, harvesting, preparation and storage advice, with a great assortment of recipes. I’ve relied on this cookbook many times, particularly when I want to broaden my horizons and try new things, as I did with kohlrabi! I couldn’t have done it – or at least wouldn’t have felt as good about it – without Morash’s advice.

As long as I’m talking pumpkin, I’ll share our recipe for pumpkin bread – it’s a variation on my go-to banana bread recipe. Somehow dazzled by the abundance of pumpkin on hand, I smooshed 3 cups worth of pumpkin into the loaf when the recipe calls for 2.  I think that was to its discredit this time around, though it still turned out very nicely and is holding up well 3 days later. So if you do try to make it, don’t wing it with the pumpkin. You can overwhelm the balance of spices if you overdo it. At two cups of pumpkin it will be plenty moist. One of the most important steps for success, I think, is to turn the finished loaf out of the pan and onto a cooling rack so the steam can escape.

Any new foods or favorite  traditions for this year’s Thanksgiving table anyone wants to chime in with? I am going to try corn bread stuffing this year as a variation. I’ve never made it, never tasted it, but I hear good things. And we’re talking apprenticing my daughter as biscuit maker.

Happy Thanksgiving to everyone! I’m grateful to be here with lots of food choices and a will to putter extensively in the kitchen. Hope you find yourselves similarly and happily occupied and with a fine crew to share the results of your labors. xoxo 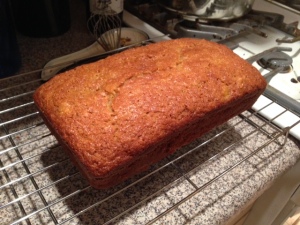