I am still feeling some lingering disgruntlement over the lackluster ending of House, one of my favorite TV shows of the past few years. The last episode of its eight year run concluded a week ago Monday. The catchphrases of the show was ‘everybody lies’ and ‘people can’t change.’ Though this latter issue was debated and tested in many story lines – especially  in the shows philosophical but fairly undramatic final hour – we could rest assured that no one changed.  If House weren’t so witty and the medical dilemmas so compelling, I would have deserted months ago. That question about change lingered though, and it felt important to be there at the end to gather in what wisdom there was to be wrung from the wrap up of the doctor’s time with us. The ultimate To Be or Not To Be inner debate (complete with unsubtle house afire imagery) seemed like just so much vanity about whether the star should continue to keep up a great franchise when he’s ready to go off and spend his fortune and fame enjoying himself. 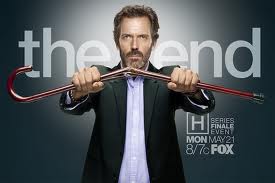 I’m not saying I blame him. Hugh Laurie did a wonderful job portraying a fascinating, misanthropic cynic. Did all that cash change Hugh Laurie? I have no way of knowing, but that kind of success – he went from character actor in British period dramas and playing roles like Stuart Little’s Dad to the highest paid actor on U.S. television because of the show’s popularity – opens up endless opportunities for him to do exactly what he wants. What he wants seems to be to be a blues musician sans the suffering and poverty. It sounds good to me. (I just learned in searching for an image for him that Mr. Laurie is, in fact, performing his blues music at the Uptown Theater in Napa tonight.)

We all count on the proposition that characters in episodic television don’t really change, even if they struggle mightily to do so. For political candidates, on the other hand, constancy is currency. They promise never to change, especially if granted their wish to gain a high elected office. Though we all know they will probably flip-flop. Mitt Romney doesn’t even profess a need to change over the shearing episode wherein he assaulted a fellow prep school student one year his junior. (Here is the Washington Post article on this topic.) These were collegial hijinks, is how Romney frames it. He needn’t be culpable because frat boys will be frat boys, yes? And it’s not like he was drinking too much, like W, who did talk openly about how he was changed by the love of a good woman in order to convince voters that his past irresponsibility was behind him.

So I wonder, as many others have before me, do people ever really change? Sure. They mature and settle down or break out and go wild, depending on what their starting place was. Other people break their hearts and eventually go on or build up the courage to start a business after years of working for someone else. When we choose to act, it often brings about change or allows some part of ourselves to come through in unexpected and freeing ways. Our same beloved characters – if they are in a movie and not a sitcom – better change or no one at the executive level will ever shoot that script. It is a must that movie characters show that they are dynamic, preferably by page 56. ☺

I can’t really say how I’ve changed over the years. My temperament is very similar to what it was when I started keeping a journal at age 12. I think I’ve gotten a bit smarter about some things and more tolerant about others. I’ve tried new things and lost some bravery in certain areas while gaining it in others. I know for certain, though, that my tastes have changed. I always liked to try new foods as a kid but some of the more exotic things to try don’t interest me any more, and other basic flavors that I never liked I now embrace willingly.

I find it interesting how people’s tastes expand with time. I won’t even assume that we always even know our own tastes. How many times has my daughter said she doesn’t like something like cauliflower, when she’s never tried it. I used to do the same. This is shorthand for ‘it doesn’t smell good, it’s too pale and it looks like it’ll squish between my teeth and make me want to gag. Keep it away from me.’  I always steered clear of banana-related desserts, though I liked a good old banana just fine. Now, I’d walk a country mile for a good slice of banana cream pie and banana bread is one of the things I make and enjoy often. For years, I could say I only had two food dislikes and those were curry and ginger. I’d shudder at the sound of ginger crème brulee or ice cream. Now, while I still don’t like the pink sliced ginger on the sushi tray or crystallized candied ginger because it’s too intense, I have come over to the ginger camp fairly readily. That ginger based salad dressing is now a favorite. I’ve even discovered that if I bake a pan of gingerbread and don’t try to equate that with the dried out stick-figure cookies I previously thought were the sum total of gingerbread’s fame, I love the stuff. (The gift of a fresh gingerbread house was actually my undoing at the start of this past holiday season. I couldn’t keep away from it.)  A friend took me out to lunch a few days ago and we chose to share a slice of ginger cake served in a pool of caramel sauce with a scoop of pumpkin ice cream. Divine. Park Chow is the place that perpetrated this four-star dessert, if you live in the Bay Area.

I’m glad for the expansion of tastes, like the expansion of horizons, in the culinary arc of me and my family. I have creative control, for the most part, and it’s fine with me if I take several seasons to build up to a taste plateau before I decide I need to develop new story lines or challenges.  I don’t have to worry about ratings, at least not beyond the fan base of those who share a place at the table. I do love getting a big thumbs up on what I serve folks, of course.

Below I offer recipes for two favorite baked goods that I make regularly but would have rejected, politely but firmly, not so long ago. 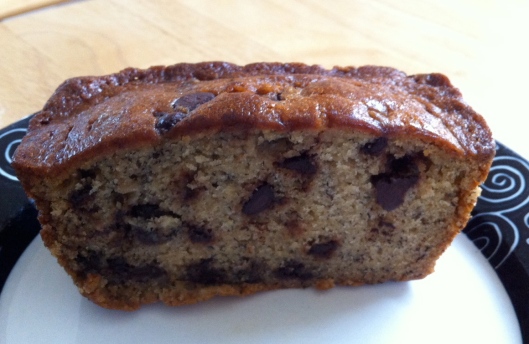 Beat butter in large bowl until fluffy. Gradually add sugar, beating until well blended. Beat in eggs 1 at a time. Beat in mashed bananas, orange juice and vanilla extract. Beat in flour mixture. Spoon ½ of batter into prepared pan. Sprinkle with half of the chocolate chips. Spoon 1/3 of batter over. Sprinkle with remaining chips. Cover with remaining batter. Run knife through batter in zigzag pattern.

Bake bread until tester inserted into center comes out clean, about 55 minutes. After 5 minutes out of the oven, turn loaf out onto rack to cool.

(Recipe from the Williams Sonoma desserts book. They serve it with whipped cream, but if you have caramel sauce and pumpkin ice cream lying around…I recommend it.)

In a bowl, whisk together the flour, baking powder, baking soda, ginger, cinnamon, nutmeg, and salt until well blended. Set aside. In another bowl, using a mixer on medium speed, beat together the butter and brown sugar until well blended and fluffy. Add the eggs one at a time, beating well after each addition, until just blended. Add the zest, if using, and beat until blended. Continue beating while slowly adding the molasses. Sprinkle the flour mixture over the egg mixture and stir until just incorporated. Add the water and stir until blended. Pour into the prepared pan and spread evenly.

Bake until gingerbread is puffed and a toothpick inserted into the center comes out clean, about 35 minutes. Let cool on a rack. Cut into squares and serve warm or at room temperature with a dollop of whipped cream.