Lately it seems my meal planning has been better than my blog planning. I know that I haven’t posted in a while, and I’m sorry about that; but to make up for the long absence, I will offer up two pasta sauces in one action-packed post. The recipes that follow are for pasta sauces that are a part of my regular repertoire. One gets thrown together like a big veggie scramble and served immediately, and the other does better if it sits on a stovetop all afternoon or all evening being largely ignored and then reheated and served the next day.

As far as meal planning goes, I’m not saying I have much to brag about, since the real pros out there are publishing their week’s worth of menus on their blogs and right now I only have only two nights planned in succession without a clue as to what I’ll make on night three. A sauce like Bolognese helps me come off as a planner. Because it tastes so much better when you serve it the day after you cook it, I’ll often cook it alongside a more simple dinner on the philosophy that cooking two meals at a time is worthwhile when it gives me dinner, mostly made, the next night.

I can’t offer up the Bolognese sauce and the Pasta alla Carbonara without mentioning my high school Italian teacher, Ms. Lovallo. My high school started offering Italian when I was in 10th grade and I jumped on it. (I think I have already mentioned my theory that if native New Yorkers are not technically Italian, they wish they were.) Our two Italian teachers in high school were both young and beautiful, just as an aside.  Ms. Lovallo was also a hoot, and on the first day of class she said we could not get an A in her class without making Pasta Carbonara for our parents and coming back with a note from them saying that her will had been done. She provided a recipe for us and it’s pretty much how I still make it now.

Ms. Lovallo is also the one who mentioned – very emphatically – that the city of Bologna was the gastronomical capital of the world and that if we ever went to Italy, we couldn’t skip Bologna. I followed her advice. At my first opportunity to visit Italy, when I was a Junior in college living abroad in London, I flew directly to Bologna and spent a few days admiring the architecture, art, and delicious food before meeting my friends in Florence (for more wonderful architecture, art, and delicious food). Also following Ms. Lovallo’s directive I ordered the not to be missed Italian beverage spremuta d’arancia. It’s sparkling soda water (con gas as they say there) with fresh squeezed blood orange juice, and it’s phenomenal. So with thanks to my first teacher who taught the appreciation of food along with the core subject matter, I offer these two favorites in my repertoire.

I changed the Best Recipe version (sacrilege!) in a few ways. I use ground turkey instead of a ground veal/beef/pork combo, subbing olive oil for butter so I can freeze the leftovers, and I also omit the celery and salt. My version may not be true Bolognese, but it means everyone at the table will eat it – since we don’t eat veal, the kids won’t eat beef and Mom won’t eat pork. Hey, the ground turkey version tastes great and is a satisfyingly light version of this signature meat sauce from the gastronomical capital of Bologna, Italy.

1. Heat 3 tablespoons olive oil in a large, heavy-bottomed dutch oven over medium heat. Add the onion, carrot, [and celery] and sauté until softened but not browned, about 6 minutes. Add the ground meat [and salt]; crumble the meat into tiny pieces with the edge of a wooden spoon. Cook, continuing to crumble the meat, just until it loses its raw color but has not yet browned, about 3 minutes.

Adjust seasonings with extra salt to taste. Keep the sauce warm. (The sauce can be refrigerated in an airtight container for several days or frozen for several months. Warm over low heat before serving.)

3. Bring 4 quarts of water to a rolling boil in a large pot. Add 1 tablespoon salt and the pasta. Cook until al dente. Drain the pasta, leaving some water dripping from the noodles. Toss with sauce and a tablespoon or two of butter. Distribute among individual bowls and serve immediately, passing the Parmesan cheese separately.

This recipe makes 6-8 portions. I reheat 1/2 of the fresh sauce, then freeze the other half in a quart ziplock bag for later use.

Pasta alla Carbonara (alla Signora Lovallo)
Because of the bacon this one is not exactly health food, but it is a very satisfying and savory dish. Most people think of the carbonara pasta sauce as being cream based but it is the cooked egg and parmesan that gives it the creamy texture. I have recently made it with turkey bacon so that my Mom could try it and she pronounced it ‘meraviglioso!’

Set large pot of water to boil. When water comes to boil, add salt (generous pinch to 1 tsp.). Meanwhile, cut the bacon into ½ inch strips and fry until done through but not crispy. Do not drain fat. Saute onion in bacon fat. (Actually, I use two saucepans and sauté the mushrooms and onions in olive oil, separately from the bacon. 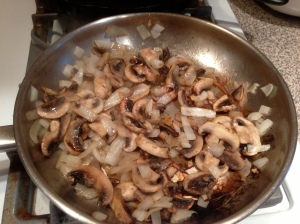 I splurge on the two pans to save time because I typically make this dish on a weeknight and don’t want to add so much bacon fat to the final product. If using turkey bacon, try to buy an upscale brand like Willie Bird.) Add pasta to the boiling water and set a timer for an al dente or slightly longer result, according to package directions. Add the parmesan cheese to the beaten eggs and beat until will blended.

Add black pepper. When timer tells you pasta is done, take about a ½ cup of pasta water from the pot with a pyrex measuring cup. Drain the pasta (do not rinse!) and return the pasta to the pot, adding onions, mushrooms and eggs and a few splashes of the pasta water. Toss as you cook over a low flame, stir the pasta for a few minutes so the egg cooks onto the pasta. Add the bacon and do a final toss. Serve at once. Garnish with more cheese, if desired. Add black pepper.

And apologies, my photo planning wasn’t so great either. I neglected to snap an acceptable shot of the spaghetti alla carbonara when all the elements were thrown together and ready to serve. If you want to see what it looks like as a finished dish, I’m afraid you will just have to make it. Send me a note or better yet your picture, and I will give you an A+!